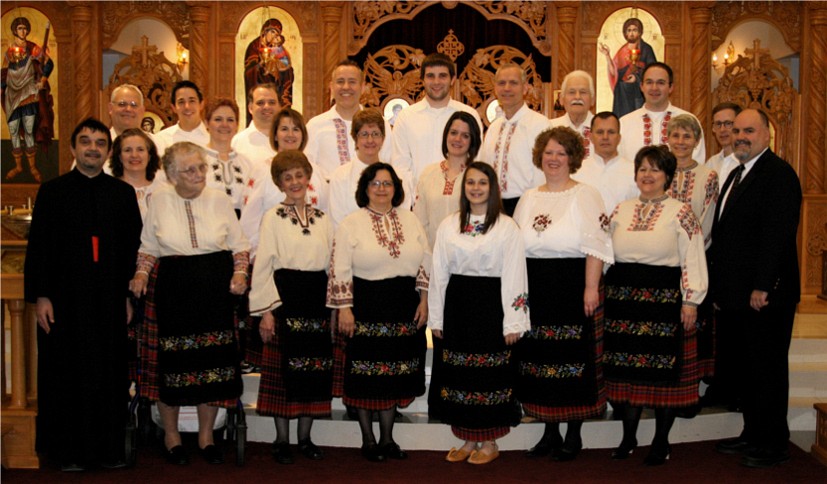 Our choir was established in the late 1920s as a girls choir to sing the responses during the Divine Liturgy and other services in Church Slavonic. The St. George choir was one of the first Serbian choirs to sing in English.

Choir practice is every Tuesday evening at 7:30 p.m. at the church.

History of the St. George choir

The first choir in Kansas City was formed as an all female a cappella choir in 1939 under the direction of Father Borah Petrovich and his son, Misha Petrovich. The following year, Father Petrovich passed away, and Father Dushan Milakov came to serve the Kansas City parish. In 1952 Father Milakov became the choir director and continued until his departure from the parish in 1956. For over 17 years, this founding church choir sang at various church social events and liturgical services.

In March of 1956, the parish welcomed Father Milan Bajich and his family to Kansas City. Father Bajich was instantly well received by the parishioners. With his renowned musical talents, one of his first duties he embraced was directing the choir. Father Bajich used these talents and his excellent musical training he received at the Sremski Karlovci Orthodox Seminary to reorganize the choir. Just nine months after his arrival, the choir became a member of the Serbian Singing Federation with the Holy Trinity Serbian Choir from St. Louis, Missouri serving as their kumovi in November of 1956.

Proto Bajich retired as the parish priest in Kansas City in 1995 and announced his retirement as the choir director at the 58th S.S.F. Choral Festival in Phoenix, Arizona in 1999. Kansas City was blessed to have him as their spiritual leader of the church and director of the choir for more than 40 years. His commitment to the choir and the federation was acknowledge at the 60th S.S.F. Choral Festival in Omaha, Nebraska in 2001, where he was presented with the +Adam N. Popovich Directors' Award. Proto Milan Bajich continued to be an active member of the choir and church until his passing in 2004.

Over the past 60 years, the S.S.S. St. George has been honored to participate as a guest choir in many Serbian communities across the United States and Canada. The choir has made many close friendships through their participation in these various S.S.F. events, but no bond is stronger than their friendship with their neighboring choir the S.S.S. St. Nicholas of Omaha, Nebraska. Many trips have been made between these two cities over the years in order to support and participate in each other's annual fall concert weekends.

The choir is very active in the Greater Kansas City community, having taken part in the Mayor's Christmas Tree lighting ceremony several years, performing in numerous local concerts, and representing the country of Serbia at the Annual Kansas City Ethnic Enrichment Festival since its creation almost 30 years ago.